“When a novel begins by paying homage to a great literary classic like The Great Gatsby, it quickly becomes a game of comparisons, and in The Art of Devotion author Samantha Bruce-Benjamin delivers a worthy and captivating story that lives up to its predecessor….A riveting tale of deception.” – The Examiner

“A haunting debut novel . . . Filled with secrets, love, betrayal, obsession, and deceit, The Art of Devotion is a beautifully rendered window into one family’s dark and complex history on an island in the Mediterranean Sea from the turn of the century until the late 1930s.” – Hamptons.com

“Bruce-Benjamin reveals her plot dramatically, tantalizing the reader with shocking revelations bit-by-bit throughout the novel until all is exposed. The Art of Devotion is much more than a quick, entertaining read. This novel delves bravely and skillfully into the themes of love, perception, family, and what people will do to keep the one they love the most.” – The Iowa Cityview

In the tradition of bestselling authors Ian McEwan and Anne Enright, Samantha Bruce-Benjamin’s brilliant and timeless debut unveils the dark side of human nature as four women share the poignant tale of love, obsession, and ultimate betrayal that binds them forever.

Have we all not wished to keep forever the one person we love the most?

The secluded beaches of a sun-drenched Mediterranean island are the perfect playground for young Sebastian and Adora. Emotionally adrift from their mother, Adora shelters her sensitive older brother from the cruelties of the world. Sophie does not question her children’s intense need for one another until it’s too late. Her beloved son’s affections belong to Adora, and when he drowns in the sea, she has no one else to blame.

Still heartbroken years later, Adora fills her emptiness with Genevieve, the precocious young daughter of her husband’s business associate and his jealous wife, Miranda. Thrilled to be invited into the beautiful and enigmatic Adora’s world, the child idolizes her during their summers together. Yet, as the years progress, Genevieve begins to suspect their charmed existence is nothing more than a carefully crafted illusion. Soon, she too is ensnared in a web of lies.

Stunningly told in the tragic voices of four women whose lives are fatefully entangled, The Art of Devotion is evocative and haunting, a story of deceit, jealousy, and the heartbreaking reality of love’s true power.

Find out more about the Themes

Here are some interesting facts concerning the main themes of the novel. Do they inform or enhance your reading of the novel in any way?

The Mediterranean Sea, or Mediterraneus in Latin, means “in the midst of lands, “ or “middle earth.”

Olive trees were considered to be sacred objects by the Ancient Greeks: A penalty of death or exile awaited anyone who dared to cut one down.  They proliferate throughout the Mediterranean basin, seemingly planted there by the Romans. The French author, Georges Duhamel, observed that; “the Mediterranean ends where the olive tree no longer grows.”

In Greek mythology, Dionysus, captured by pirates in the hopes of securing a ransom, turned their oars into serpents, forcing the terrified sailors to jump overboard, before he took pity and transformed them into dolphins so that they would spend their lives helping those in peril or need at sea.

Bougainvillea was first classified by the French naturalist Philibert Commerçon (or Commerson) in Brazil in 1768 and named after the French Navy admiral and explorer, with whom he was travelling, Louis de Bougainville, during de Bougainville’s successful circumnavigation of the globe.  Also, whilst on this voyage, he identified a particular type of dolphin in the Strait of Magellan that is now referred to as Commerçon’s dolphin.

These questions are intended to enhance your book group discussion of The Art of Devotion by Samantha Bruce-Benjamin.

*Please note that some of these questions reveal certain plot points that you may not wish to know before you have finished reading the novel.

Invite Samantha to join your book club.
Email her at samantha@samanthabrucebenjamin.com to set up a virtual author visit.

Close this
On Writing The Art of Devotion

What was the first line of the novel that you wrote?

It’s still in the book and I still have the original document. It was Adora: “All I had left was your love: the splintered shards I clutched to my chest, despite the pain.”  From the beginning, all I could hear was her voice.  I knew from the outset that she was ruined, but I had no idea why or how that had transpired.  Yet, I had to write her down; she simply would not leave me. For me, the sentence conjured up an image of the sea. The image of her, clutching shards, struck me, in some way, as if she was marooned from a shipwreck, clutching the wreckage. That metaphor subsequently informed the rest of the novel.

How did the idea for The Art of Devotion derive?

First of all, I have a long-standing love of the sea, and islands, such as I have known in the Mediterranean, have always struck me as being governed, to some degree, by the whims of the Gods; there’s something precarious about their unparalleled beauty, almost as if they could be consumed by the sea at any given moment. Onto that stage, I wanted to place characters who, by their very nature and existence, inhabit a world, from our contemporary perspective, that we know is inherently fragile; a world so rarefied and refined – of grace and favor and privilege – that, in so many ways, no longer exists. Most crucially, I wanted to present an idyll into which any reader could escape, almost like a holiday itself.

Yet, within that brightly lit framework, I wanted to examine the shadows founded on three themes: the nature of gossip, perception, and idolatry, all three of which, I believe, are inexorably linked. By contriving a novel around four distinct “voices,” and examining the same set of events from each different perspective, I was able to play with the idea of unreliable narrators and readers’ allegiances: the characters present themselves without authorial interference, in a sense, because there’s no third-person narration. All the reader knows is what they are told by the characters, in their voices, and it is entirely the reader’s choice with whom they choose to align their sympathies.  There is a quote by Anais Nin, that I found myself thinking of often, during the writing of the novel, that asserts: “We don’t see things as they are, we see things as we are.”  I think it’s a very powerful and compelling insight.

I also wanted to examine universal emotions with which readers would readily identify: grief, love, devotion and each character’s divergent approach to them. Most crucially, there’s no authorial judgment throughout the book: I want readers to believe what they choose, to align their affections accordingly, to agree or disagree with the characters, based only on their own perceptions. Yet, in subverting every single thing the reader believes to be truth at the end of the novel, I also wanted to cast doubt over the blithe assumptions we ritually make: do we believe what we hear or trust what we know and, if so, why? That is the question that dominated the writing of the book and I asked it as much of myself as I would of any reader.

Why have you chosen to set your novel in the 1930s?

It’s my favorite era, primarily because, I think, like most people, my knowledge of it derives from the wonderful films of that period.  The costumes and the actresses and the sheer giddy joy of such cinematic splendor never fail to thrill me. Also, of course, the books of that period are amongst my favorites; A Handful of Dust, Rebecca, the PG Wodehouse Jeeves and Wooster novels, I just revel in them.

Yet, more seriously, I’ve always considered the 1930s to be an inherently poignant decade when viewed from a contemporary historical perspective because, of course, we all know now that World War II was lurking on the horizon to change everything.  So, there is a fatalistic aspect to that period that I wanted to plumb in the context of the novel. By focusing the predominance of events in The Art of Devotionduring the summer of 1938, I wanted enough distance from rumblings of war to have the characters rest somewhat easily in their privileged milieu, but just enough foreshadowing that a reader’s perspective would be informed by having such an historical reference.  I imagined them as gilded idols, drenched in summer, before the fall, literally and metaphorically, almost as if there would never be another summer. It was to be the last of everything – of peace, of joy, of innocence and it had to burn so brightly as a consequence that the full force of the tragedy would be felt – both metaphorically and historically.

What is the symbolism of the dogs Adora and Sebastian rescue?

Lost and discarded souls, outcasts, almost like Adora and Sebastian themselves; animals who, by the very nature of their existence, are dependent upon another person’s kindness to survive and who will die without it; who, hideously, are so often cruelly and disgustingly abused unless someone rescues them. I conceived of the olive grove where the dogs live as a limbo of sorts: in my imagination the house represented purgatory where Adora would atone for her perceived sins, the olive grove her limbo where she and her dogs were kept safe, and the sea is intended to represent paradise. Within the context of the novel, Linford, Adora’s favorite dog and the guardian of the olive grove, figures as the personification of perfect grace. I don’t think there is a more beautiful dog than a greyhound. So, like Sebastian in his fragility and exquisite beauty, it was my idea that whenever Adora was in Linford’s gentle, knowing presence, she felt not only entirely understood, but forgiven, in that he accepts her companionship and asks absolutely nothing of her. He functions not only as her sole friend, but also figures as the most perfect and poignant example of devotion the novel possesses and, to that end, for me, provides its most haunting and enduring metaphor. 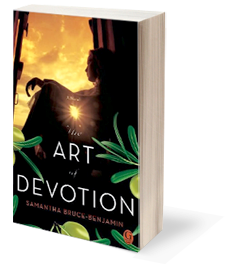